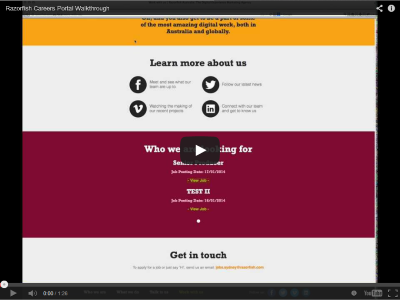 This is the website for Razorfish Australia (RFAU) at the time I completed my modifications. I was initially tasked with integrating a Web Service (WS), which provides access to a centralised HR management system, with the RFAU Careers Page ('Work With Us').
At the most basic level, this involved developing a php snippet plugin which queried the WS for active Job Vacancies matching the RFAU Organisation ID and stored all the returned vacancies in a data storage object (or optionally an array) for later use on the page which included the snippet/plugin.

It also involved integrating the snippet/plugin into the page itself, as well as the creation of additional site functionality when the contents of the vacancies broke the existing styling/formatting of the Work With Us page.

Whilst developing for this site, I learned a great many skills, including but not limited to: